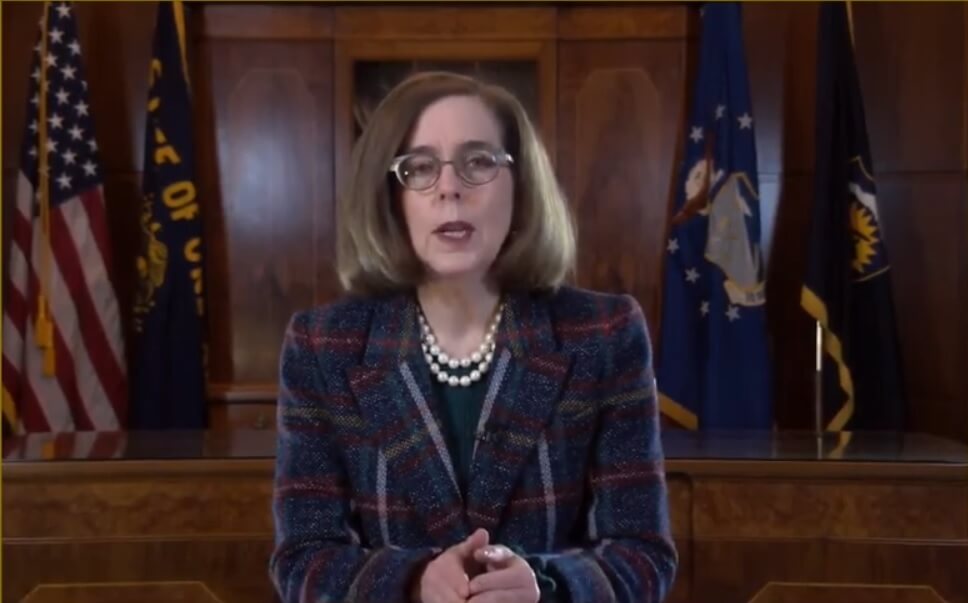 Oregon Governor Kate Brown gave her annual State of State speech to kick off the 2021 Legislature.

Here is my decoding of her speech.

“My proposed budget doesn’t put enough money into our schools,”

• The Legislature just enacted the largest tax in Oregon history ($1.3 billion) in 2019 with the funds dedicated to schools.  The year before that you raised taxes on small businesses by nearly a quarter billion dollars to in part help fund schools. What is government doing with the funds taxpayers already gave you?

“…it doesn’t make all of the investments in public health we need.”

• The Legislature just enacted a $334 million health care tax (2019), raised 39 health care fees for the Oregon Health Authority and passed a $300 million tobacco tax (2020).  What is government doing with the funds taxpayers already gave you?

“I also expect the Biden-Harris administration to help us financially.”

• Unlike previous Oregon Governors,  Brown’s 2021-2023 proposed budget is billions off balance.   It is becoming a wish-list more than a helpful budget.  Brown is building holes into our state budget plans in hopes for a federal bailout.  Bailout budgeting by the billions is a sign of dysfunctional leadership.

“The Biden-Harris administration can help unite this unnecessary division,especially in the west, by providing federal funding for broadband expansion.”

“That’s why I am committed to strengthening this country’s democracy.And it starts right here,right in this building.”

• Gov. Brown weakened our democratic institutions and abused her emergency power by blocking the people’s elected representatives from having their vote in the COVID-19 rules decision making process in a timely and regular manner.

Gov. Brown weakened democracy when she tried to force her massive Carbon Tax with a special (fake) emergency clause which blocked voters from having a right to immediately vote on it.   When her Carbon Tax plan failed, Gov. Brown went around the elected Legislature and began forcing implementation of parts of the Carbon tax plan through passing Executive Orders.   The Carbon Tax battle alone proves how far-reaching Gov. Brown went to subvert both voters and their elected Representatives.

Gov. Kate Brown weakened our democracy when it was discovered that a highly controversial death penalty bill was passed under fraudulent pretenses which resulted in the surprise shock of 28 of 29 death row criminals being set-free from their death row capitol punishment, the media and elected lawmakers requested a special session to fix the error.  Gov. Brown refused to call a Special Session and ignored the calls by lawmakers, the media and crime victim families of those injured by Oregon’s top 28 worst criminals.

Gov. Brown may tout her measures to sign up new voters, but goes out of her way to block voters from actually voting on or having a say in critical matters facing the state.

“In May we began reopening businesses, taking a county-by-county approach.  Some said it was too cautious. Others thought it was too risky.”

• By June, Oregon was among the last three states to fully re-open.   When we did re-open the summer, the restrictions were highly restrictive as Oregon had the nation’s 6th most restrictive rules.   Those restrictions came with an actual cost as Oregon suffered more job losses per-virus death than the national average (we ranked 5th worst job loss).  As of January, Oregon remains among the only four remaining lock-down states.  We retained high 30-day criminal penalty threats for small infractions which made Oregon ridiculed across the nation.   Oregon was among the first to close public schools and among the last 11 to re-open.  Since Oregon has consistently been among the earliest closed, longest to be closed, highest penalties and most restricted when not in lockdown, it is dishonest to imply that you acted “too risky”.

We find it ironic that Oregon has been consistently EARLY to close things but LATE to do the right things like vaccinate (3rd slowest in December), issue jobless benefits (ranked 50 in nation to deliver) and open DMV (2-month delay).  We extend Gov. Brown much grace during a pandemic because we are all humans facing a historic crisis, but the numbers show a glaring problem compared to the other 49 governors.

“In a historic event, hot, dry, winds brought on a wildfire emergency that our state has never seen before.”

• The wildfire may have been “historic”, but it was fully predictable because there has been a steady frightening increase in wildfire damage rising over the years. Despite record breaking tax revenue, Gov. Brown underfunded the Forestry Department by $230 million (a number that made newspaper headlines months before the wildfire).   Oregon has not been doing controlled burns to help remedy dangerous fuel built-up forest areas.  Oregon is losing miles and miles of forest roads to decommissioning, yet these roads are critical in giving firefighters access to fires.  Timber land being blocked for harvesting is going up in flames.  Gov. Brown may decry 2020’s wildfire as “never seen before” but for many people it was a wildfire seen coming based on both escalating fire damage and Oregon’s tragic forest policy mismanagement.   You simply cannot make all the wrong decisions on forest management for nearly a decade and not expect a historic wildfire.