This lockdown may prove different.  Opposition is coming from the top down instead of the ground up.  We list below several high profile objections by made statewide groups and leaders.

Our office has chronicled the shutdown debate since it first happened in March 2020 and have reported on developments with over 130 articles on the subject.  We can sense that things are more at risk.    We want the Governor to succeed and the virus to be recede but we see big problems that compromise both.    The Governor is operating from historic highs in negative job approval (58%).    The Governor has not been in the headlines over the past few months offering solutions but rather in the headlines for hiding data and bungling the vaccine rollout.   Down south, lockdown overkill created a citizen revolt in California forcing the Governor to pull back restrictions.   Oregon is not immune from a similar scenario.

Furthermore, the rest of the nation’s direction works against Oregon.  The state remains a high-restriction state among only a few others. 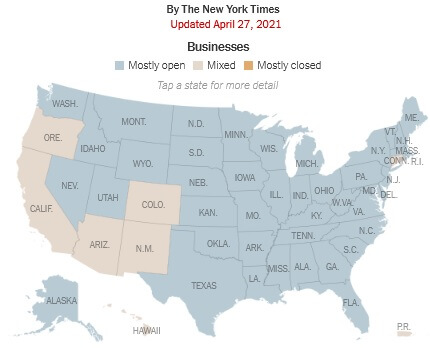 Also, nearly half of the states have dropped their mask mandates.   Nearly half!

Oregonians know that some states have had in-person schooling since September, but Oregon just started this month.  All of these factors play into the public’s mind and work against a lockdown.

Here is a list of some of the major groups and voices that spoke out within hours of the new announcement.

Oregon Restaurant & Lodging Association states, “Yet again, Oregon Governor Kate Brown punished local restaurants announcing another wave of indoor dining bans in 15 counties starting Friday, April 30. Current coronavirus outbreaks as reported by the Oregon Health Authority have been tied to education institutions, health care settings, private social gatherings and manufacturing facilities. However, Oregon’s plan and ongoing risk categories continue to target and penalize restaurants, gyms, and fitness centers as the predominant set of restrictions deemed necessary to mitigate virus spread. There have been no super spreader cases tied to these environments at any point in the over 13-month pandemic in Oregon….Despite no evidence or correlation between COVID-19 case spikes and restaurants, Oregon’s new extreme risk category includes a new statewide metric: Covid-19 positive patients occupying 300 hospital beds or more, and a 15% increase in the seven-day average over the previous week. Meanwhile, more than 1 million Oregonians have been fully vaccinated. In addition, the Governor’s Office moved away from their normal practice of reviewing hospitalizations based on weekend data and instead used data from Monday which included over 300 hospitalizations in Oregon….Restaurants have only three days to try to adjust their businesses, dispose of perishable food and reduce staffing again. In addition, restaurants will not be able to order food, schedule employees, or plan out their operating hours in advance as weekly changes are implemented by the Governor’s Office.”

Clackamas County Chair Tootie Smith stated, “It is time Governor Kate Brown take another approach to reducing the spread of COVID-19. The plan that she has been using for the past year to slow the spread of the disease by keeping businesses locked down has not adapted to this dynamic pandemic. Her metrics for reopening are eroding trusts in many communities including Clackamas County. Governor Brown’s plan is an abject failure, driving businesses to bankruptcy, people to the unemployment line and harming the mental health of adults and children alike. It is time for Governor Brown to hand control over back to the local public health authority and county commissions as outlined by law. We know our counties. We know our communities. We know how this disease is spreading in our communities….As more and more people are being vaccinated every day, it is time for a new approach that does not penalize businesses. I ask that the state use the data driven approach they have touted to make decisions about business restrictions. If the state were truly using a data driven approach we would not be restricting restaurants and closing gyms.”

OPB chronicled rising frustrations among business owners, “I don’t know if I can make it through another shutdown,” said Tracy Roundy, co-owner of Gramma’s Corner Kitchen in Milwaukie. “It will be the third shutdown in the last year.” Roundy and her mother own the Clackamas County diner together — “a lifelong dream” for her mom. After Friday, they will still have a handful of outdoor tables, but Roundy said she would have to lay off staff again. She grew emotional listing the steps they’d taken to keep the restaurant afloat: the plexiglass between tables, the extra sanitation, paying for delivery services, applying for federal loans, using personal savings, borrowing money from family and friends. “Honestly, it makes me angry,” she said. “How hard we’ve fought to stay in business.” Some restaurant owners worry another shutdown, and another round of layoffs, will make it even harder to hire workers back. Ashley Baldwin, co-owner of The Hive Social in Oregon City, said staffing up after the winter shutdown was difficult enough.“We had a lot of people who either decided they didn’t want to be in this industry because it was too much of a rollercoaster, or other restaurants that they had also worked at were desperate for more time from them,” she said. Baldwin worried that even a short shutdown would drive staff away, making it hard to operate normally — and recoup losses — when restrictions ease.”

Oregon Business and Industry said “…we know there are some that cannot sustain the financial blow and will have no choice but to close their doors for good. Empty storefronts on main streets across our state are proof of the devastating impact of forced business closures over the last 13 months. These latest closures – with little time for the businesses to prepare – are one more setback to business owners who have followed all the rules, keeping their customers and employees safe for more than a year…The governor has committed to regularly reviewing the closures and limiting their duration if the pandemic trends improve. We will hold her at her word.We urge Gov. Brown and the Legislature to act immediately to establish a fund to cover losses sustained by business owners in this latest round of closures and to provide a safety net for Oregonians about to lose their jobs – again.”

Oregon House Republican Caucus stated “Despite adding more groups to vaccine eligibility, booking a vaccine appointment has proven difficult for people as some counties received disproportionately lower vaccine supplies than others. Another issue with vaccine access in Oregon has been controversial distribution decisions that failed Oregon’s seniors and our most vulnerable.“15 Oregon counties entering ‘extreme risk’ is the result of inadequate vaccine access for the past two months,” said House Republican Leader Christine Drazan (R-Canby.) “Our businesses allow people to gather in places with standardized safety measures. We shouldn’t shut them down. They are doing everything they can to reduce the spread of COVID-19 under existing rules. In response, they need more than nominal rent assistance. More one-time federal funds from the American Rescue Plan Act should be used to expand on this relief to preserve our main streets and protect jobs.”