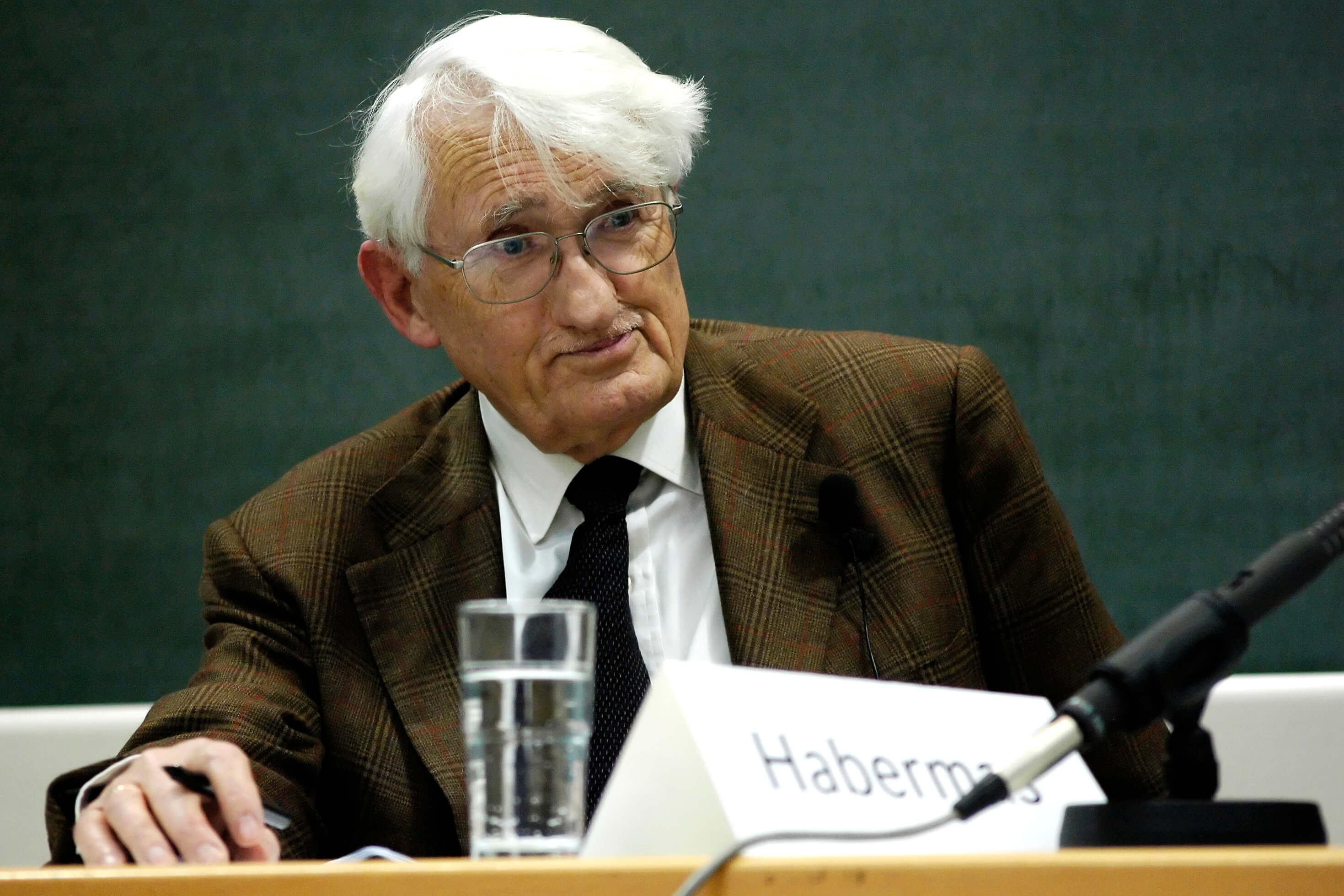 If it were not for Jurgen Habermas, the Frankfurt School would just be another relic of the 1960s, like the bowl cut and the Volkswagen Bus. He is this school of thought’s second-generation dean. Born in Gummersbach Germany a year before Horkheimer took over the Institute for Social Research, Habermas never had to flee the Third Reich for a number of reasons, among them: he was Lutheran, not Jewish, and he was a Nazi, not a Marxist. After the war, Horkheimer and Adorno returned to Germany, and Habermas studied under them and would go on to write several books, two of which are canonical for Critical Theory.

In 1962, just as the first generation of the Frankfurt School was losing steam, Habermas published Untersuchungen zu einer Kategorie der bürgerlichen Gesellschaft (The Structural Transformation of the Public Sphere), which essentially created a new discipline on college campuses across the Western World called “media studies” which applies Critical Theory to public communication. Habermas developed the idea of the Public Sphere (Öffentlichkeit) where people freely discuss ideas in the early modern world. He contrasted this with the medieval world where no distinction between state and society or between public and private existed. Medieval society was organized around symbolic representation and status. Modernity came when these feudal societies were transformed into a bourgeois liberal constitutional order which distinguished between the public and private realms. This sounds like the classic Marxist distinction of one epoch of history transforming into a new epoch.

Like the rest of the Frankfurt School, however, Habermas departed from a Marxist view of history. Instead of theorizing about a progression to a better tomorrow, Habermas dated the demise of the Public Sphere with the rise of mass culture and mass media. In the 19th century, Habermas would say, we stopped having a Public Sphere, where people are freely exchanging ideas. Instead, the mass media started dictating to us how we should think.

This is a very popular view among the left today. That might seem strange to a conservative that likes to gripe about a left-wing bias in the media, but the far left do the same thing. They see a right-wing bias that staves off a revolution. If one were to forge a book cover in Tucker Carlson’s name for this Habermas classic, and hand it to the Alt-Right, they’d read this left-wing tome like it’s the gospel.

Habermas published his second canonical book for Critical Theory in 1981. Theorie des kommunikativen Handelns (Theory of Communicative Action) saved Critical Theory from Frankfurt School nihilism. The first generation of the Frankfurt School had a tendency to see no hope for humanity. Horkheimer and Adorno’s Critical Theory was mostly just barking at the moon with little expectation of making the world a better place. In this book, Habermas developed an optimistic vision for the New Left.

Whereas the Frankfurt School had previously seen the progression of history as the demise of rationality, Habermas developed an epistemology of liberated rationality. Habermas argued that reason is not grounded in objectivity, but rather an emancipatory communicative act. When the people protest and debate, their authentic selves overcome the bondage of mass culture.

Habermas diagnoses the problem in this gem of a sentence “In the end, systemic mechanisms suppress forms of social integration even in those areas where a consensus dependent co-ordination of action cannot be replaced, that is, where the symbolic reproduction of the lifeworld is at stake. In these areas, the mediatization of the lifeworld assumes the form of colonization.” That term “lifeworld” comes from Edmund Husserl, and it means something like lived experience. What Habermas is saying is that the “system” (or he might as well say “the Man”) prevents a healthy Public Sphere from emerging. This is the belief behind the common left-wing idea that everyone would be progressive if it weren’t for the Koch Brothers or some kind of corporate control over public discourse. And again, is this that far from a similarly popular conservative lament? Just replace the Kochs with George Soros.

Habermas sees the solution to this problem as a process of communicative rationality where we have public dialogue that is “oriented to achieving, sustaining and reviewing consensus – and indeed a consensus that rests on the intersubjective recognition of criticizable validity claims.” What is a validity claim? These are Husserl’s lifeworld perceptions of reality. With this definition of rationality, Habermas shifts the emphasis in our concept of reason from the individual to society. Habermas’s Theory of Communicative Action is that language is social and thus inherently rational if the right process of argumentation takes place.

The goal is consensus, but a debate of some kind is central to the process of achieving a rational result. Contested validity claims are thematized to then vindicate or criticize the validity claims in a systematic and rigorous way. Habermas describes the three conditions from which argumentative speech can produce valid results:

In practice, these three conditions have been getting applied as:

When these three conditions are met by commutative action, Habermas says communicative rationality is achieved and different validity claims are brought to a satisfactory resolution.

What if there is no satisfactory resolution? Habermas has taught progressives that means something went awry. Persistent differences of opinion mean we are not liberated. Habermas’s form of Critical Theory is widely influential, forming the intellectual foundation behind doctrines of community organizing and teaching the humanities to undergraduates. That is why we have such left-wing intolerance for people with opinions progressives consider wrong. People need to be canceled lest they infect the Public Sphere.