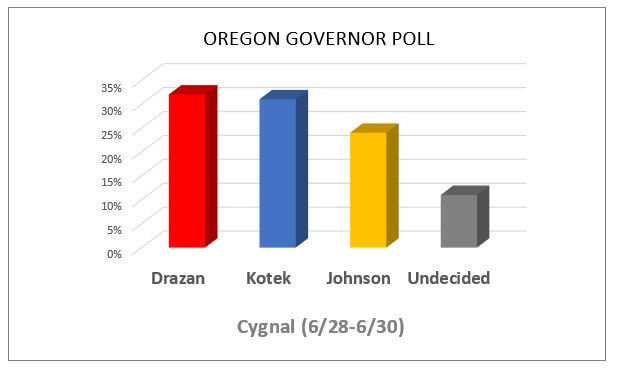 The Oregonian reports, “Republican nominee for governor Christine Drazan and Democratic nominee Tina Kotek are leading in the three-way race for Oregon governor, according to new survey results released Thursday from a poll paid for by legislative Republicans.Drazan had a slight edge over Kotek in the poll, although the two women were in a statistical tie at 32.4% and 31.4% support from likely voters. Unaffiliated candidate Betsy Johnson came in third at 24.4%, which puts her within striking distance of Drazan and Kotek given the poll’s 3.94% margin of error.The poll was conducted by the well-rated Washington, D.C.-based firm Cygnal. It found 11.7% of likely general election voters remained undecided when the poll was conducted June 28-30…Drazan’s campaign manager Trey Rosser said the results showed Drazan is connecting with voters. “Today’s poll further proves what we already know to be true: Christine Drazan has the momentum in this race and is well-positioned to win in November,” Rosser said in a statement.”