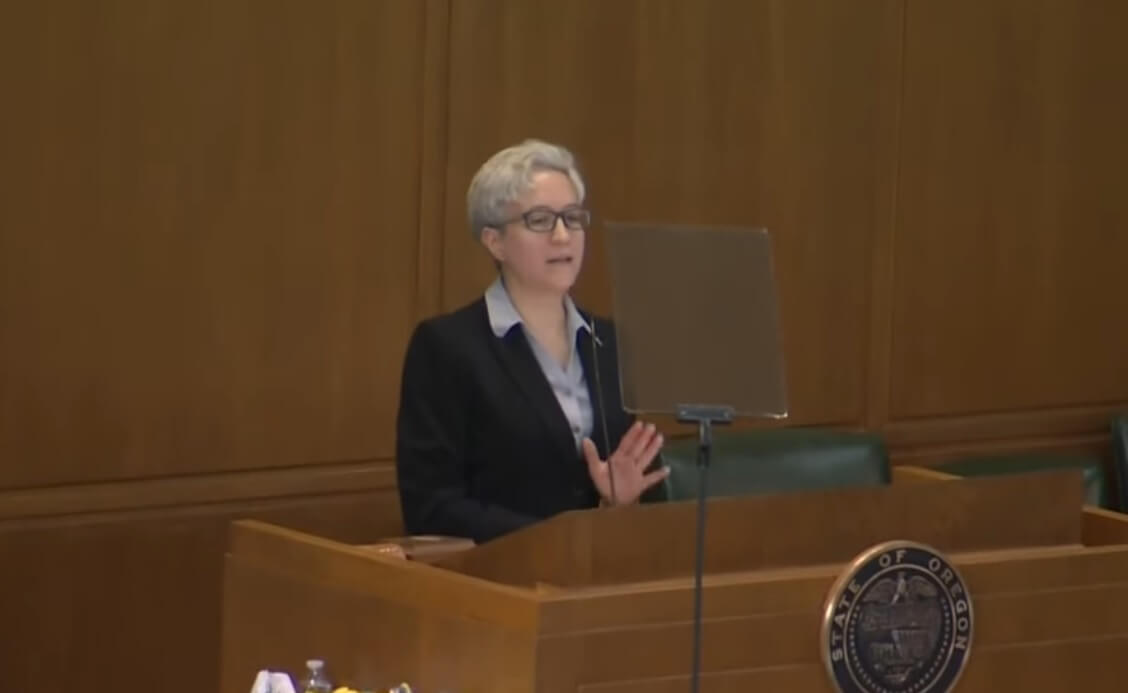 Let us at the Taxpayers Association decode Governor Tina Kotek’s inaugural speech this week.   As fellow Oregonians we wish her well as she starts her term … but … based on her speech, we are concerned that her nice sounding words and bold promises do not match her past-record, which spells trouble for Oregon.

Taxpayers Association response: If Kotek believes governing is about serving “all Oregonians” then why did she block all political parties (but her own) from the Oregon political boundary redistricting process? Kotek not only provided Oregon one of the most politically biased redistricting plans in the nation, she broke a public pledge to work with the other side.    During Kotek’s near-Decade long reign as House Speaker, she consistently ram-rodded key bills during the final days of Legislative Session where the other political party lawmakers (Independents, Republicans) were deprived of advanced notice of what was being voted on.

Governor Kotek: “It is my pledge to all Oregonians…to be a partner with you in solving problems”

Taxpayers Association: Kotek was not even a good partner with her fellow Democrat lawmakers when she was House Speaker. Consider what Democrat State Representative Marty Wilde said last year of working with Tina Kotek, “I could not continue to participate in a caucus that had stopped acting democratically. We had failed to set a positive example of transparency …worst of all, leadership positions were filled based on success in fundraising, not merit or expertise. The House Democratic leaders even stopped telling the caucus members about their discussions. In effect, the content and direction of legislation for all of Oregon was decided by a group of 10 or fewer people picked by their ability to raise money, in secret.”

Governor Kotek: “I launched my One Oregon Listening Tour in Yamhill County a couple of weeks ago. On this visit, and the ones to follow, I want to hear directly from people who are doing the hard work every day to serve their community”

Taxpayers Association: Based on available information, it appeared that Kotek “listening tour” involved a surprise visit roughly a few days before Christmas to Yamhill County to talk to an audience of some 37 people, many of whom work for the government or get money from the government.  At this rate, by the time Kotek talks to a self-selected friendly audience of 1,440 people she will have successfully “listened” to nearly 4 million Oregonians representing all 36 counties.

Governor Kotek: “The second big thing I’m committed to, so we can turn things around, is increased accountability in state government.”

Taxpayers Association: Great idea! Start accountability by fixing the $24 billion government pension (PERS) debt.  It grew $10 billion while you were the third most powerful person in the State Legislature.  You can’t claim you are holding government “accountable” if you are sinking the state into bankruptcy.

Governor Kotek: “And, finally, the last commitment — and the big ask of you…We need you to be a part of the solutions that will make a difference.”

Taxpayers Association : No matter the amount of Oregonians being asked to do more will fix the problem caused by big government liberal policies that destroy the everyday work of Oregonians. Churches and charities cannot repair broken lives fast enough when Tina Kotek & Kate Brown’s liberal policies create a crime wave by releasing 1,000 criminal early and vote for reduced prison time for countless crimes that have set free thousands of additional criminals on our streets early.   Oregonians cannot spend enough weekends volunteering to build free homes for poor people fast enough as long as Kotek continues to drive up the price of housing through higher taxes and regulations — already government fees and regulations add $100,000 in over-cost expenses before the first shovel is laid on the grounds of a house.  Simply put, politicians break things faster than Oregon volunteers can build it.  Here is the broken cycle of government: Liberal politicians tax people out of their homes and then raise property taxes higher to pay for government to build affordable homes for people who cannot afford to buy one. Liberal politicians raise taxes and labor costs on small businesses forcing them to lay off workers, and then raise taxes on small businesses again to pay for benefits of people not working.  Liberal politicians work to shut down healthy sustainable forest harvesting which create fire-prone hazards which result in catastrophic wildfires which in turn encourage politicians to double down on their failed forest policies causing even more wildfires.  What we need is not asking Oregonians to do more or pay more but for government to do less destroying our quality of life.

Final thoughts:  As said, we wish our new Governor well.  Her statements are very nice and if truly enacted would help create a better Oregon.  The problem is that such nice things have been said before and have been used to put a positive spin on a destructive agenda.   We contrast what Kotek said with 10 years of what she has done.  They don’t match.  This makes us gravely concerned.

— post-script— We previously reported on a poll which shows that 57% of Kotek voters think Oregonians on the right track.   How can Kotek and her supporters fix a problem that they do not even think exists?