Wyden last won election in 2010 over Jim Huffman (R). An April 2015 article in Roll Call said that despite criticism over Pacific Rim trade deals, a primary challenge for Wyden was unlikely and they called this a Safe Democrat seat.

Late last month, Jeff Mapes at the Oregonion reported that Wyden had nearly $5 million in his war chest. Mapes reported that Wyden “continues to rapidly raise campaign cash” and “At this point, no major candidate has stepped forward to run against him.”

Oregon’s 1st Congressional District – this seat is currently held by Suzanne Bonamici (D), who replaced disgraced former U.S. Rep. David Wu (D). Bonamici is married to the man who served as Wu’s lawyer, Judge Michael Simon. According to Ballotpedia, Cook Political Report rated this seat Solid Democratic in 2014, and there are no known 2016 opponents at this point.

Oregon’s 2nd Congressional District – this seat is currently held by Greg Walden (R), Oregon’s only Republican U.S. representative. According to Ballotpedia, Cook Political Report rated this seat Solid Republican in 2014, and there are no known 2016 opponents at this point.

Oregon’s 3rd Congressional District – this seat is currently held by Earl Blumenauer (D), Oregon’s most liberal U.S. representative. According to Ballotpedia, Cook Political Report rated this seat Solid Democratic in 2014, and there are no known 2016 opponents at this point.

Oregon’s 4th Congressional District – this seat is currently held by Peter DeFazio (D). According to Ballotpedia, Cook Political Report rated this seat Solid Democratic in 2014, and there are no known 2016 opponents at this point.

Oregon’s 5th Congressional District – this seat is currently held by Kurt Schrader (D), in this Oregon congressional district with the closest voter registration (only has a 2.1% Dem voter registration advantage). According to Ballotpedia, Cook Political Report rated this seat Likely Democratic in 2014, and there are no known 2016 opponents at this point. 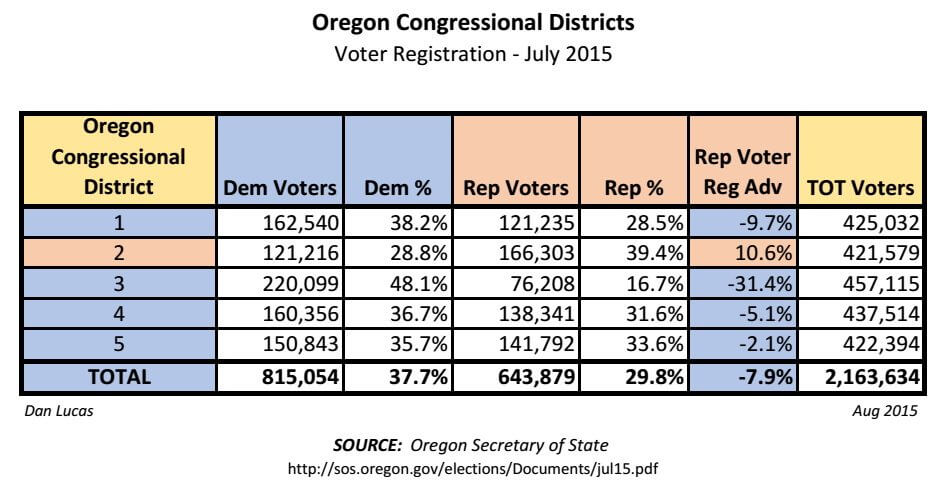 Ordinarily Oregon wouldn’t be electing a governor in 2016, but when John Kitzhaber resigned back in February, it triggered his replacement by then Secretary of State Kate Brown and a special election in 2016. Kitzhaber resigned in disgrace, amidst numerous state and federal investigations.

Last month Rep. Knute Buehler (R-Bend) announced that he was considering a run for Oregon governor in 2016. As Oregon Catalyst reported, if Buehler and Brown were to win their party nominations, it would then be a rematch of the 2012 race for Oregon Secretary of State.

Salem doctor Bud Pierce has indicated he’ll be seeking the Republican nomination for governor. He has already given his campaign $250,000.

On Friday, the South County Spotlight (South Columbia County, Scappoose, St. Helens) reported on speculation that moderate Sen. Betsy Johnson (D-Scappoose) might be exploring a run for Oregon governor as a member of the Independent Party of Oregon (IPO) – now a third major party in Oregon. A decision to run as an IPO candidate in 2016 would need to be made soon – September 10, 2015 is the final date to join the IPO in order to appear as a candidate on their May Primary election ballot.

UPDATE: 9/11/2015 – State Sen. Betsy Johnson (D) will not be changing parties to the Independent Party of Oregon, and thus presumably also is not looking at running for governor.

UPDATE: 8/28/2015 – KGW and the Oregonian are reporting that Monica Wehby is considering a run for governor.

UPDATE: 8/28/2015 – The Bend Bulletin reported that Dennis Richardson is ‘not interested in running’ “for any 2016 position at this time”

UPDATE: 10/23/2015 – It was reported in the Oregonian and GoLocalPDX that Allen Alley is considering running for Oregon governor in 2016

When Kate Brown moved up from secretary of state to governor earlier this year, she appointed Democratic insider Jeanne Atkins to replace her. The Oregonian reported that Atkins would just be serving in a caretaker role – that she wouldn’t be running in 2016.

The same March 2015 Oregonian article reported “House Majority Val Hoyle, D-Eugene; Senate Majority Leader Diane Rosenbaum, D-Portland; and Sen. Richard Devlin, D-Tualatin, have all been described as expressing interest in the seat. Republicans, who haven’t won a statewide seat in Oregon since 2002, don’t seem to have a similar list of likely candidates.”

Last Thursday, The Oregonian reported that Oregon Labor Commissioner Brad Avakian is “actively exploring” a run for Oregon secretary of state in 2016, and that Hoyle and Devlin are still considering running. As Kate Brown is no longer secretary of state, it’s not clear if Brad Avakian would be able to get the election moved again if that becomes necessary in order for him to win.

Lane County commissioner Sid Leiken (R) announced at the end of June he’d be running for Oregon secretary of state.

UPDATE: 10/29/2015 – “Former twelve-year Oregon lawmaker Dennis Richardson announced today that he’ll be filing for the position of Secretary of State.”

Republicans have their work cut out for them in Oregon’s 2016 races.

In the past 20 years, every Oregon governor, secretary of state, attorney general and state treasurer has been a Democrat. 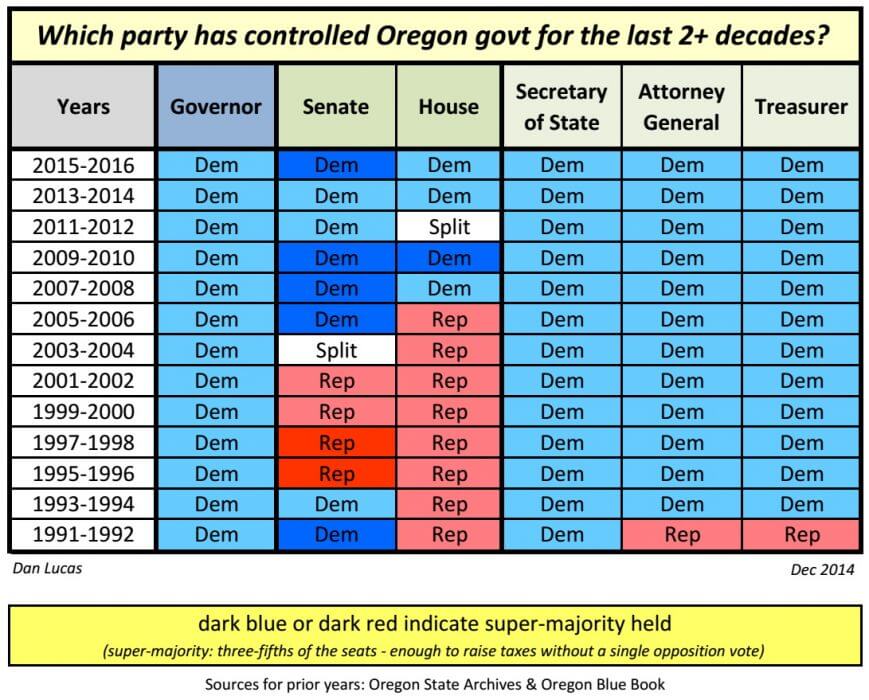 As of July 2015, Democrats hold a 7.8% statewide voter registration advantage over Republicans – Democrats have 171,175 more voters than Republicans.

The steep up-hill climb for Republicans in Oregon is likely contributing to the low number of Republican candidates so far.

After that bit of cheery news, it’s on to the remaining state-level elections.

State Rep. Tobias Read (D-Beaverton) has announced he’s running for State Treasurer. Read has been endorsed by current Treasurer Ted Wheeler – who is up against his term limit – and he’s received $5,000 campaign donations from “from two of the most successful female executives in corporate America,” one from his former boss who was “chief of staff for then-U.S. Treasury Secretary Larry Summers.”

The Oregonian and Willamette Week are both reporting that Jeffery Gudman, a Lake Oswego city councilor, plans to seek the Republican nomination.

UPDATE: 11/9/2015 – The Oregonian reported that “Jeff Gudman, a Lake Oswego city councilor, filed Monday to run in the 2016 Republican primary for state treasurer.”

The Bend Bulletin reported that Chris Telfer is “considering running for state treasurer as an Independent.” Telfer is “a Bend certified public accountant, Oregon Lottery commissioner and former [Republican] state senator and Bend city councilor,” who “ran unsuccessfully for treasurer in a special election in 2010 as a Republican.” According to the Bulletin, Telfer registered as an Independent in late July or early August.

Oregon’s current Attorney General, Democrat Ellen Rosenblum, has announced she will run for re-election in 2016.

Rosenblum was elected with the help of hundreds of thousands of dollars of marijuana lobby money – “at least a third of the $699,000 Rosenblum raised” in her Democratic primary. Willamette Week, where her husband is the publisher, reported “Rosenblum is the first statewide official in Oregon whose election was fueled by drug money.” Ironically for an attorney general, the state’s top law enforcement official, marijuana remains illegal at the federal level. As I wrote back in May, marijuana “remains illegal at the federal level per the 1970 Controlled Substances Act. At the federal level, marijuana is still a Schedule I drug, along with drugs like heroin and LSD. Anyone growing, selling or possessing marijuana is still committing a federal crime punishable by at least up to five years in prison and a fine up to $250,000.” Oregon’s marijuana laws are in conflict with federal laws, to put it mildly.

Rosenblum has drawn criticism for not doing her job. She refused to defend the Oregon constitution (Article XV, Section 5a – the definition of marriage) and she was criticized in the media for “sitting on her hands,” “dragging her heels,” and being “AWOL” for not investigating fellow Democrat John Kitzhaber.

I haven’t heard of any possible opponents yet for Rosenblum.

There are no term limits for Oregon Attorney General.

The following Oregon state senate seats are up for election in 2016:

One area that may be a problem for Roblan is his flip on second amendment rights. Most recently, he voted for anti-gun bill SB 941 – Oregon’s unnecessary, unconstitutional and unenforceable expanded gun background check law. The last time he was elected in 2012, Roblan earned an “A” rating from the NRA and he was endorsed by the NRA. He won’t have either of those for 2016.