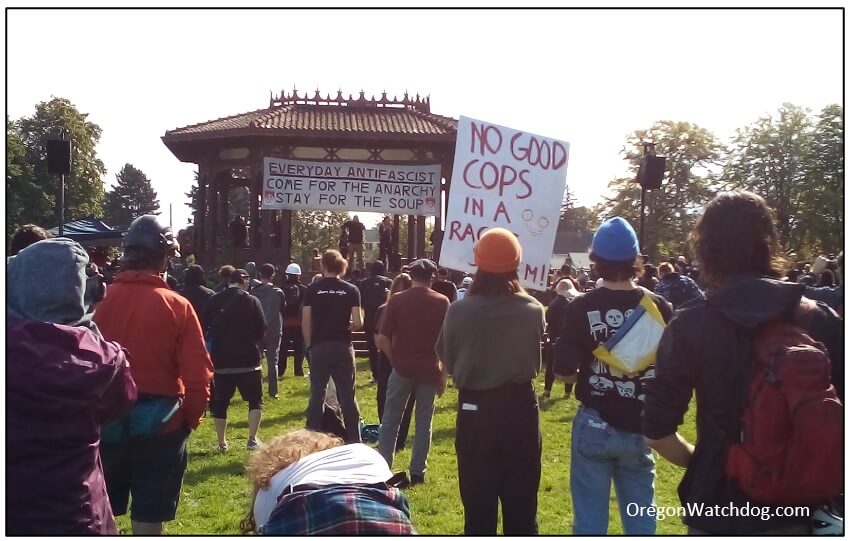 A group of about 20 Antifa members, fully decked in masks and body armor, were lounging about in the North end of Peninsula Park.

A black man, looking like he just returned from work, walked by and began to challenge the Antifa group saying “Why do you guys have to go about wearing masks?  Carrying baseball bats and go around attacking people?”

One of the Antifa members replied in effect by saying “We have to do it this way” and “We are doing this for you”.

The Black man replied that he was for Blacks Lives Matter and had the skin to prove it.  He again chided them for hiding behind masks and attacking people, and even suggested he knew who one of the masked Antifa members were.

The short conversation ended just as quickly as it started but it was symbolically powerful and a possible sign of Antifa’s dying influence.

Remember, Gallup poll shows 81% of Blacks want current or more police funding.   Yet at the event people were promoting abolishing police and prisons.

Support for Black Lives Matter has fallen from 54% to 39% since George Floyd.  BLM no longer has even a bare majority of support.  Antifa and the riots have squandered all the opportunity for progress.

I could not tell you how brave this Black man was to step up to a group of 20 Antifa guys and begin criticizing them to their face.

As I left the rally, I noticed how destroyed the neighborhoods were.   There were dozens of closed businesses and so much graffiti that I found it hard to travel 60 seconds in Portland without seeing a sign of vandalism.   Having lived in Portland, I know it was not always this way.

You can see how this Black man is probably tired of having extreme Leftists come in and riot, loot, vandalize in the name of helping the Black community.

This rally does not reflect the other liberal, moderate and conservative voices for racial justice.  People working for solutions that do not involve street violence or calls to destroy our police or our prisons.

P.S. I wish I could have taken a photo of the exchange, but sometimes you just need to experience the moment and not interfere by being a Paparazzi.

Read our other articles on the rally: