Having people riot inside the U.S. Capitol, leaving four dead, was a travesty on many levels.  Since nearly a quarter million people showed up to a support-Trump/Anti-election fraud rally, the day could have been a symbol of people uniting in impressive numbers against election fraud.  Instead a few hundred people decided to storm the U.S. Capitol.   If you look at the video you will notice these people who stormed the Capitol carried shields and used mace on police which tells us that they came to fight.

Anytime we mention violence done by the right on this blog, we always get people who dismiss such violent people as secret leftist plants (just like liberal Portland Commissioner JoAnn Hardesty who blamed the Portland riots on local police officers acting in secret).   I saw people make this terrible hidden-Antifa argument on FoxNews last night.  Conservative journalists for the Daily Caller, Richie McGinnis, was reporting from inside the Capitol crowd and noticed that the rioters were very much different than the ones he covered during the anarchists riots across the nation last year.  He noticed that they were also very older by comparison.

If you look at the video of people storming the Capitol you will notice many of the rioters without masks on.  Does anyone really think Antifa decided to take off their masks while storming the Capital in order to fool everyone that they were Right-leaning folks? 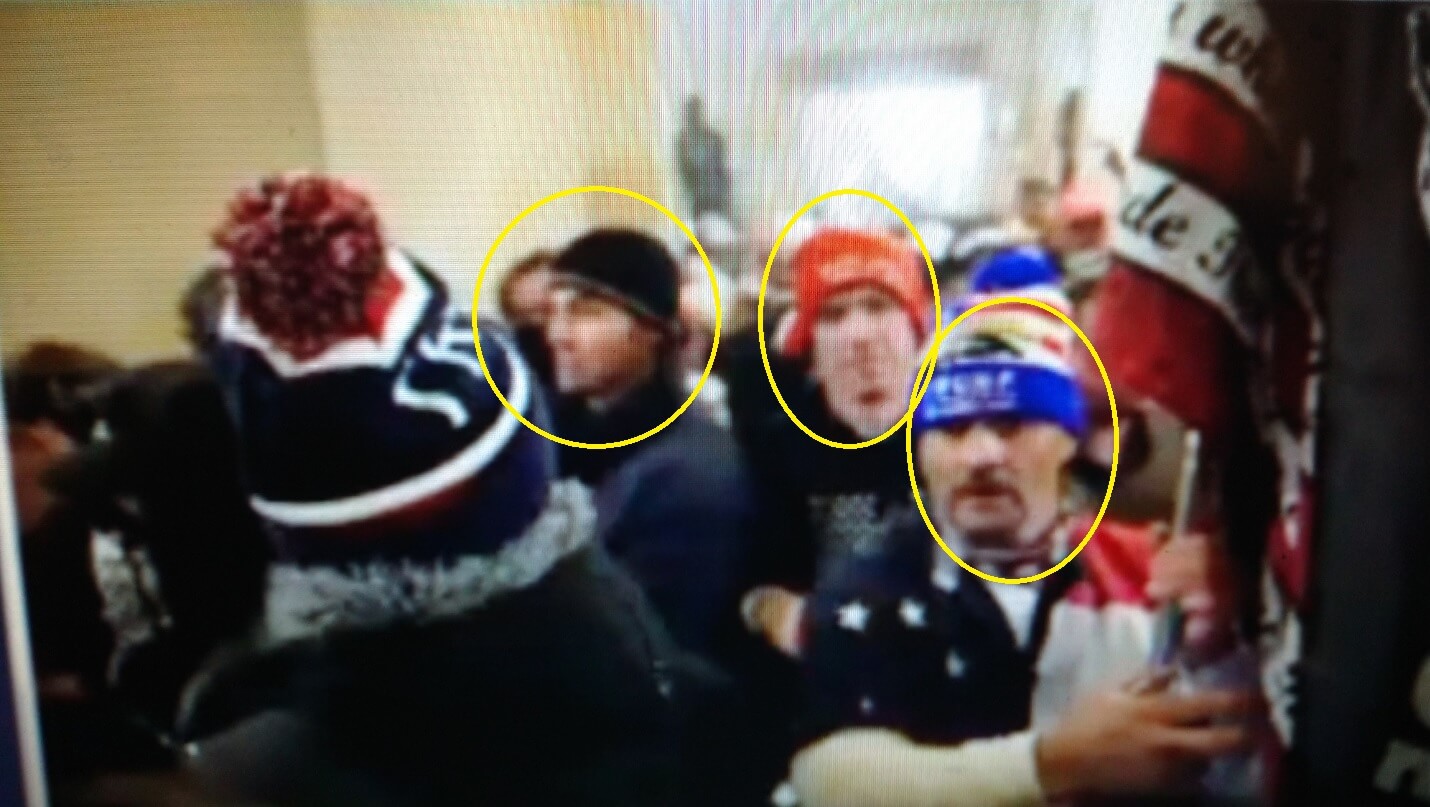 Conservatives need to stop making excuses and call out criminal acts when they occur in our movement.

This riot was a truly sickening anti-Democratic, un-American moment in our History. 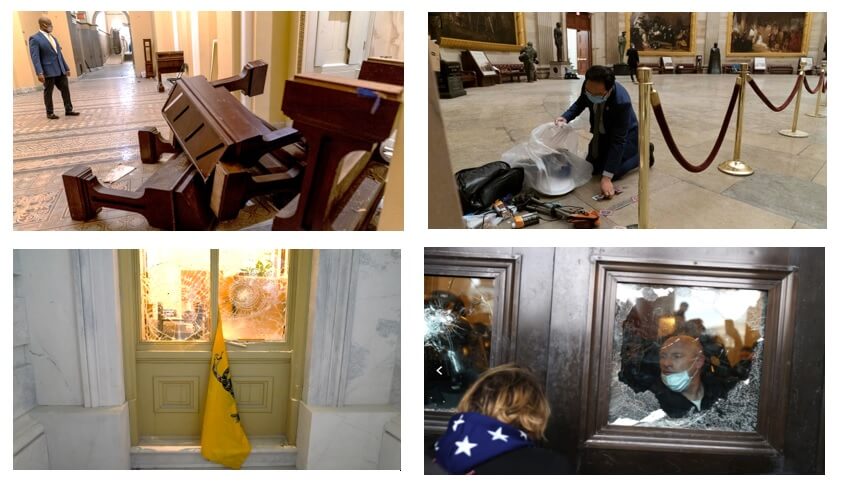 The storming of the Capitol was an attack on our shared representative form of government and an attack on the brave men and women of law enforcement who protect it.

The struggle over how a movement defines itself could be seen during the same-day rally in Salem State Capitol where several hundred people showed up to support President Trump. This event was peaceful and featured a live video feed of the President making a very long case for voter fraud.  Someone at the event decided to burn Governor Kate Brown in effigy. This is just an ugly thing to do and something that most people associate with third world countries.   When people starting burning Kate Brown at the rally there was much disagreement in the audience.   This moment represents the inner-civil war occurring among conservatives and is worth pointing out.

People had a right to disagree because that one dumb effigy moment became the defining photo of the Salem rally.

Compare the photos used by the media to ones at the * same * rally that were never picked up. 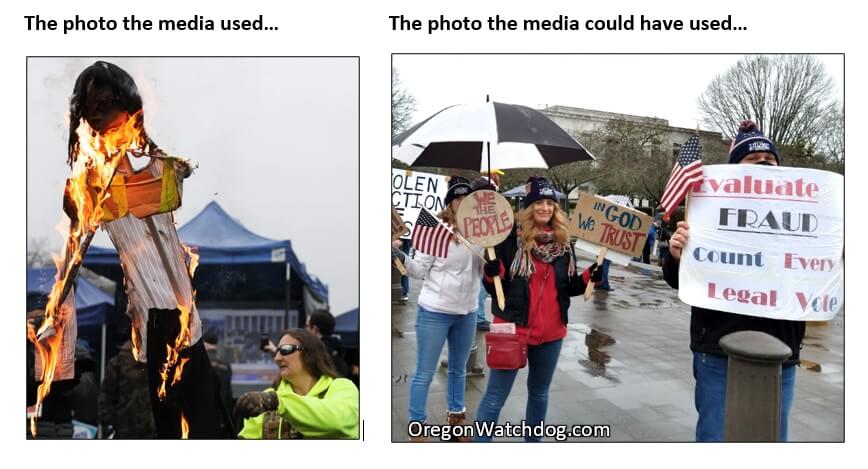 Once again, we have no right to cry “media bias” if we continue to give the media reasons to be biased.  More extreme acts always will get the attention.

Check out the photo below.  This woman at the Salem Jan 6th rally has been waving this sign every week since the November elections.   Nearby and later was a man trying to raise money to help his organizations efforts at reviewing the Oregon election results for fraud.   Violence by Right activists, whether in DC or in Oregon, only makes fighting voter fraud even more unlikely because political violence will betray all the principles you care about.   People who riot in the US Capitol can’t say they are doing it to fight a higher cause of voter fraud, because they are setting the movement backwards and taking with it good souls and their hard work like the ones in Salem. 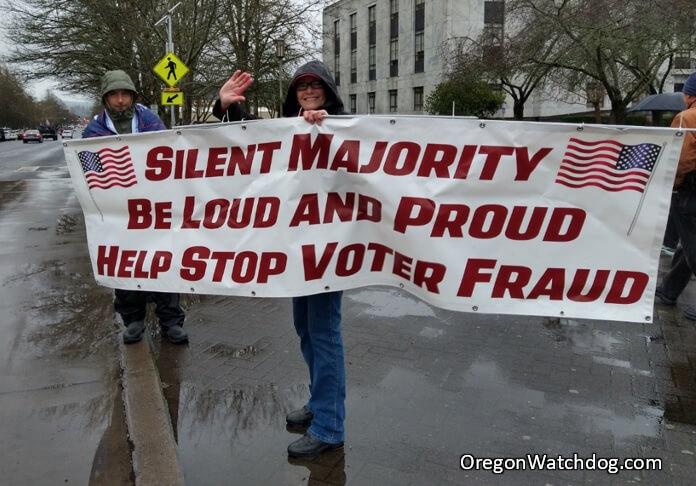 Violent acts often are followed up by politicians exploiting the crisis.  Consider what happened after 9/11 and how the war on terror suddenly began swallowing up our civil liberties that had nothing to do with fighting terrorism.   I say this to remind everyone that short-term violent solutions bring long-term harm beyond your imagination.  The damage from unchecked political violence will be unbearable.  Political violence is not the answer.

Yet, there are  Right leaning activists who crave the attention and the fight.  Their excuse is that they say BLM and anarchists do it all the time so we can do it too.   In reality the riots have been destructive for Black Lives Matter.   According to Civiqs, support for Black Lives Matter rose after George Floyd and them sank below to under 50% after the riots.   Despite all the good will given to Black Lives Matter (from the media, sports and movies) the movement doesn’t have majority support today.   This is because they can’t control their violent elements doing harm in their name.   Political violence is not the answer.

Speaking of Black Lives Matter, last year several top European leaders pressed China’s President directly on their human rights abuses.  His response was to pull a list of BLM rioting examples in America as an example of of how Western nations have failed.   This is a reminder that as mobs attack the U.S. Capitol they are attacking the symbol of freedom around the world and setting back the cause of human rights for billions.  Political violence is not the answer.

I mention the political ramifications not to focus on a political benefit/loss for a cause but rather to show everyone that no one will be immune to the damage when political violence becomes normalized.

At the Salem Trump Rally a man in bullhorn decried, “If we don’t fight right now we will lose our country forever!”   Six days earlier at a noon anarchist rally blocks away at Bush Park the same thing was said from the liberal speakers.   Right now, political people feel like the end is just days away.  This despair is driving people to justify doing extremist things.   America has been on the brink many times, enough to know that we are the best country to revive itself during terrible times as we have done so many times in our history.  America is worth fighting for in the way that will bring victory and lasting change.

— The Taxpayer Association has called out the examples of violence in Oregon by Right leaning activists (Dec. Capitol rally, Sept. Capitol Rally, violence against liberals) because we apply the same morality to all political people.   And for the record, we have called out the violence and riots among liberals so many times it has become an ongoing series.