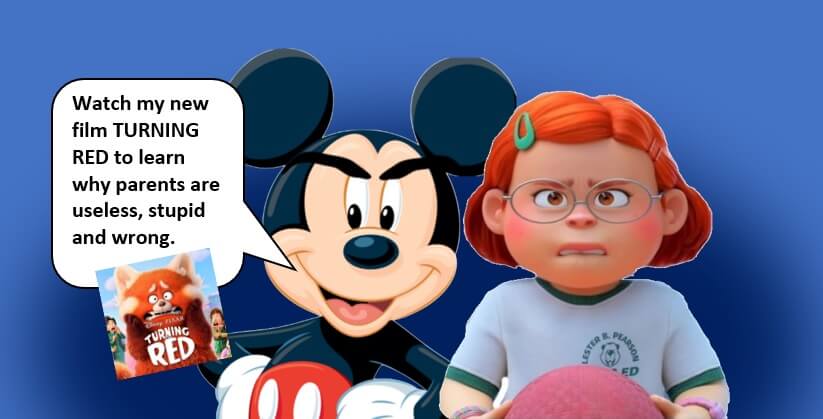 Note: Before you watch a Disney film this holiday season, please consider what quietly happened earlier this year with their controversial film Turning Red and why it was one of the worst films Disney ever produced.

The most anti-parent kids’ film ever made was not only made by Disney earlier this year but specifically targeted the film to 8-12 year old audiences and then (likely fearing parental backlash) was diverted from theaters and instead put directly on Disney + streaming service where fewer parents would notice it and coincidentally more under-age children would watch it.

Many young adults films unfortunately involve parent bashing, but this film, Turning Red, crossed the line by marketing it to 8-12 year olds who lack any balanced understanding of the anti-parent messages.

Over 27 years, Disney’s Pixar films has produced 26 animated features.  All of them have been suitable for all ages.  Go to a Pixar film and in the theater you will see 5 year olds in the audience.  Under this family friendly Pixar name is where this film, Turning Red, was created.   Turning Red takes place in a Middle school with pre-teen characters which is another reason this film is designed to appeal to a middle school audience.  Turning Red is about a girl who magically turns into a red panda as the film describes itself as a metaphor about entering menstruation.   The subject matter is meant to encourage parents to use the film as a tool to help pre-teens deal with puberty.   Some push that this film should be seen by every Middle School child.  Furthermore, Disney promoted this film on the McDonald’s Happy Meals where the core audience is 3-9 years of age.   Simply put, everything about this film is about reaching kids at the youngest of age.

The milestone moments in the film (first words, climax words, last words) are all themed around anti-parents or anti-authority.

The very first words spoken in the film are a slight against parents.  It opens with the protagonist girl, Mei-Mei, saying “The number one rule in my family? Honor your parents!  Honoring your parents sounds great, but if you take it too far, well, you might forget to honor yourself. luckily I don’t have that problem.”  I found it strange to see a kids cartoon film targeted towards 8-12 year-olds, warning kids about not honoring their parents too much?   It gets worse.

The climax of the film is also a slap against parents.  In an act of defiance, Mei-Mei says “I tried to be a good daughter. I’ll never be like you! I like boys. I like loud music. I like gyrating (twerking)… Deal with it!” Then Mei-Mei twerks her buttock in front of her mother, which is a defining moment that breaks the magic spell.  From here the movie begins to conclude. Once again, a strange plot device that Disney uses by taking the very sexual dance  that parents hate the most (twerking) and uses it by a 13-year old girl to defeat her mom (who was a giant monster at the moment).   This is also extremely unhelpful to schools that wrestle with twerking issue at school events.   To have a child scream “I’ll never be like you!” to her mom as one of the defining key heroic messages of the film is awful.   The daughter shouting “Deal with it!” is the film’s crude way of saying the 13-year-old is right and the parents are wrong.

The concluding moral message in the film spoken by the mother is “Don’t hold back for anyone, the farther you go the prouder I’ll be.”  In context the mom is saying that her daughter should not restrain herself for anybody (parents, teachers, friends) and the farther she goes in experimenting into her wild side (the red panda beast) the happier mom will become.   What terrible advice to give a pre-teen.

The final words spoken of the entire film are the girl saying, “We all have an inner beast, We all have a messy, loud, weird part of ourselves hidden away, A lot of us never let it out.. I did. How about you?”   The film’s final message to pre-teens is to do what feels good, let it out, give in to the inner beast.    Not only is this bad advice in general, but it was bad advice in the film itself.  When Mei-Mei turns into her inner beast she destroys all kinds of things and in one scene angrily pins a child to the ground and almost hits him.

Those are just three examples of the daughter rebelling at the three important plot points in the film.   They do not include other moments where the daughter says “What’s my mom gonna do do? Ground Me. Ha ha ha.” and says “My panda, my choice” which means the daughter has the right as a 13-year-old to decide if she wants to turn into a giant red panda monster or not.   Disney is saying parents have no right to tell a 13-year old what kind of monster they want to act out as.

In addition to the daughter’s constant over-the-top parent bashing we have other kids in the film who say very inappropriate things.  One kid lampoons the daughter for being a “mama’s girl” and then calling her mother “psycho”.   It is really inappropriate for 8-12 year olds to see a film where other kids make fun of other kids for liking their parents and to witness other kids calling their parents psychos.   The target audience is too young to see this.  The fact that these type of message appear almost every 5 minutes makes it overwhelming. 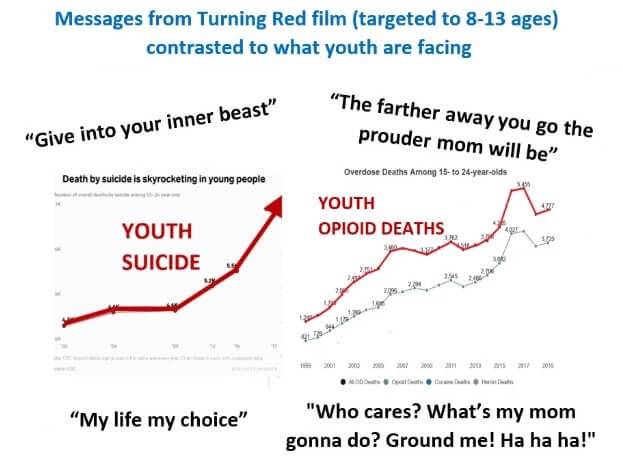 These are just some of the examples of the anti-parent messages in the film.

As stated, this takes place almost every 5 minutes in the film on average. 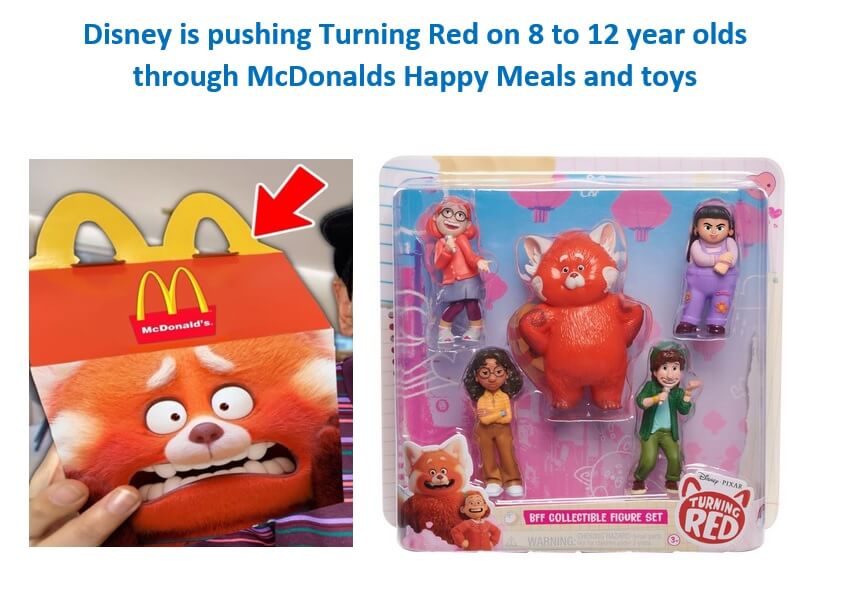 Disney is afforded the right to produce youth rebellion-themed films, but we must agree as a society that there are some ages it is too young to process it.   Although Disney+ puts some age restriction on their streaming service depending on location, nonetheless kids will watch this movie.   It is right in their home.

Parents need to call the stops when media companies cross the line.  Disney has definitely crossed the line.

Turning Red is not the only bad message Disney film of late.  In the 2022 Pinocchio remake, lying is encouraged.   In the 2019 Dumbo remake, all zoos are determined to be unnecessary and should not exist.    In the 2021 Captain America TV series, acts of terrorism by refugees is justified.    Children cherished super-heroes are now actively using profanity.

Parents already feel overwhelmed by social pressures and social media.  Having one of the last remaining parent-friendly media firms in America suddenly turn anti-parent, pro-profanity and backwards ethics is a serious setback.