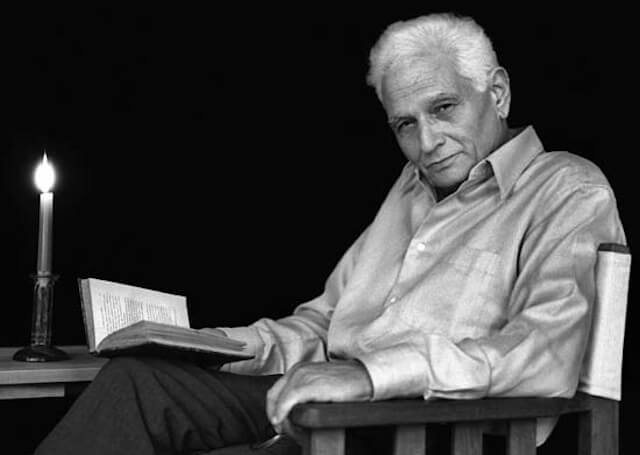 Critical Theory rests on two separate pillars: the Frankfurt School and Postmodernism. The Frankfurt School originates from the work of Max Horkheimer and the school of thought he founded. The Postmodernist foundation to Critical Theory has two fathers. There is deconstructing social conventions through the identification of power relationships founded by Michel Foucault. The other Postmodern approach is to deconstruct social conventions through the limitation of language as developed by Jaques Derrida. While these are all separate theories, they have tended to merge together under the banner of a common rejection of both traditional beliefs and the scientific rationality of Modernity forming the basis for what we commonly call Critical Theory.

Derrida is more a wrecking ball than a founder. The intellectual arc he bent started when the anthropologist Claude Lévi-Strauss, influenced by the linguist Ferdinand de Saussure, developed Structuralism as an alternative to Existentialism. Structuralism sought to move past the nihilism of Existentialism with a general theory of culture based on the notion that elements of human culture must be understood through their relationship to a broader system, moving 1950s continental philosophy from the rudderless individualism of Existentialism to a socially-defined meaning behind all the things that we do, think, perceive, and feel.

Derrida went after the reductiveness of Structuralism. Like Structuralists, Derrida started from the assumption that people’s identities, values, and economic conditions determine each other rather than having intrinsic properties that can be understood in isolation. That is to say, Structuralists were relativists too. But the Structuralist project sought to understand how the subjects of their study might be scientifically described as a set of essential relationships, schematics, or mathematical symbols. In contrast, Derrida developed a linguistic method to challenge the notion that social behavior can be reduced to social scientific study.

In 1967, Derrida published De la Grammatologie (Of Grammatology) where he developed a theory for philosophy, literary criticism, and textual analysis with the assertion that absolute meaning in language requires “Il n’y a pas dehors-texte” (there is no outside text). Yet there are outside texts. So, language lacks absolute meaning.

Derrida was saying the other texts outside of the studied text itself can and do give meaning to it and every other text in an ever-evolving way. Context is always present in the interpretation of a text, and context is unstable, always changing. This attention to a text’s unacknowledged reliance on metaphors and figures embedded within its discourse is characteristic of Derrida’s approach. Derrida’s method involved demonstrating that a given philosophical argument depends on binary oppositions or excluding terms that the philosopher has declared or implied to be irrelevant.

This is not entirely crazy. Take a dictionary: If you want to look up a word to find its meaning, the dictionary will give you another set of words, all of which have a definition made up of yet another set of words that each require a definition, ad infinitum. In that sense, the meanings of our words are derived from certain circularities. Derrida turns this into a form of radical skepticism.

This sophistry is actually not so new, and by “sophistry” I literally intend to evoke the original pejorative connotation of that label. In Fifth-Century Athens, an intellectual movement called the Sophists taught rhetoric and an epistemological relativism emerged with the craft of their pedagogy on public speaking, the notion that there is no absolute truth. One of the most prominent thinkers of this Presocratic school of thought was a man named Gorgias who wrote a book titled On Non-Existence where he postulated:

Thus even if something exists, it effectively doesn’t exist, because we can’t know anything about what exists.

In Plato’s Γοργίας (The Gorgias), a dialogue between Gorgias and Socrates so devastated this method of literary deconstructionism, that it took two millennia for Gorgias’s worldview to make a comeback with Derrida. Today, it is alive and well in the humanities departments of most Western universities, serving as an influential foundation to Critical Theory.

This is the seventh in a series on Critical Race Theory (CRT).