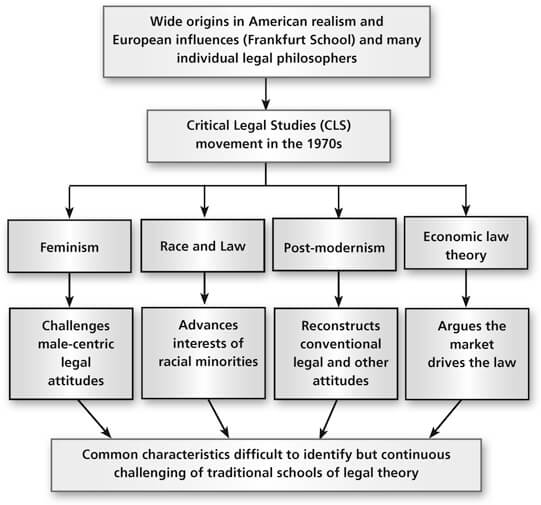 CLS was a second bite at the apple of dislodging Legal Formalism from its predominant perch, where the law is understood to be the rules-based application of public policy. The first bite was called Legal Realism, which was developed by law professors at Columbia and Yale in the 1920s, taking inspiration from the opinions of Supreme Court Justice Oliver Wendell Holmes. Legal Realism tried to make a science of the law, seeking a value-free method like the natural sciences, rather than basing judicial decisions on philosophical principles of justice. Legal Realism focused on the observed factors involved in judicial decision-making.

Legal Realism successfully called into question whether judges, in practice, actually follow jurisprudential rules in a consistent manner, but it failed to produce an alternative to Legal Formalism. As a result, we have seen liberal judges incoherently reject the authority of legal text but still attempt to assert formal rules such as a right to privacy. Legal Formalism is thus alive and well in liberal judicial opinions, not just conservative.

CLS tried to offer a new alternative to Legal Formalism in the wake of Legal Realism’s failure. In 1976, Roberto Unger, a professor at Harvard Law School, published the book Law in Modern Society, and another Harvard law professor, Duncan Kennedy, published the Harvard Law Review article Form and Substance in Private Law Adjudication. Together, these two publications founded a new means of opposing formal legal principles by advocating for the unabashed politicization of the judiciary.

CLS questioned mainstream legal doctrines in four ways. First, CLS saw the law as nothing more than the rules of dispute resolution between groups. Law is politics, they surmised. Second, CLS saw legal reasoning and the scholarly literature coming out of law schools merely the preservation of elite interests, maintaining the status quo, and marginalizing radical change to the established system. These institutions being under the control of liberals, CLS was just as opposed to liberal jurisprudence as conservative jurisprudence. Third, CLS rejected the existence of a private sphere outside of politics, finding even the culture of law schools and law journals just as oppressive as formal regulations that suppress dissent. CLS found everything political and thus opposed traditional teaching methods and academic standards. And fourth, CLS saw the law mistakenly treating individual petitioners as having full agency, making decisions based on reason that is detached from political, social, or economic constraints. CLS instead held that individuals are tied to their communities, socio-economic class, gender, race, and other conditions of life such that they cease to be autonomous actors. People cannot be “free” CLS argued; they are instead determined by the social structures that surround them.

CLS soon petered out. They formed a network of left-wing legal scholars, but could never form a coherent theory of law that would serve as an alternative to mainstream jurisprudence. In 2014, Unger said it this way in a forward to a new edition of his 1983 classic The Critical Legal Studies Movement: “Critical legal studies became active in the United States in the mid 1970s and continued as an organized force only until the late 1980s. Its life as a movement lasted for barely more than a decade.” He went on to say that was because CLS was never meant to become a school of thought. CLS was only meant to intervene in a particular circumstance.

Unger’s explanation was disingenuous for two reasons. First, if you read Unger’s earlier writing, the establishment of a new school of legal thought was one of his ambitions. Second, the “particular circumstance” he referred to is still in place.

Two decades earlier, Duncan Kennedy offered a better explanation for what happened in an interview by Suffolk University Law School’s The Advocate. The interviewer starts off by asking the most basic question of what CLS is. Kennedy started by describing what it was:

Initially, just about everyone in the network was a white male with some interest in 60s style radical politics or radical sentiment of one kind or another. Some came from Marxist backgrounds — some came from democratic reform. The ex-Marxists tended to be people who were disillusioned by sectarian left politics of the 60s and moved away from seeing themselves as hard liners. The liberal reform people had been disillusioned in a different way: by the failure of the federal government and the “system” as a whole to respond to the social problems of the 60s, the war, the civil rights movement and the women’s movement. They had been moved to the left by their experiences of the 60s, whereas the more radical types had been moved to the right, or at least out of the hard militant posture. Then there were people who had missed the 60s or who weren’t involved in it at all, but in retrospect a lot of themes of activism and oppositionism and stuff like that looked good to them. They were looking to redo the 60s.

Duncan Kennedy’s answer never transitioned to the present. He went on to describe CLS’s main themes using the past tense. The interviewer then asked: “Duncan, in your description of critical legal studies you seem to have been using the past tense. Has the theory changed? Is it different today?” Kennedy’s answer described CLS as essentially breaking up into separate interest groups.

Yes it is. I think it’s interesting what happened to it. I’m not sure I completely understand why it changed, but it did. Here’s the way I’d describe it. The project that I was describing was trying to get a handle on legal doctrine as both rules of the game and as part of the legitimating discourse of the political system. That project still exists and still continues but it’s a much smaller component. In the early 80s, there was an enormous increase in the number of women law professors and also the beginning of a more left wing feminist kind of legal scholarship and legal work. In the network, the number of women involved in critical legal studies expanded very rapidly. That is, white women overwhelmingly. And then quite soon after that the number of minority men and women began to increase in legal education, and quite a few of them were interested in CLS as well. The largely white male originators got older, and a new generation of white men came onto the scene.

At this same time, it got to be a lot riskier than it had been to be identified as a crit, because we lost a bunch of tenure battles around the country. And the quite theoretical project about doctrine attracted lots of people who weren’t particularly interested in a left activist project in law school anyway. Which is what a lot of us had been doing.

The result of that was a period in which the network went through one crisis after another. They were the kind of crises that happen when you try to create a mixed-gender anti-hierarchical milieu, and a racially heterogeneous milieu. It wasn’t a struggle for control; there was no effort to subordinate everybody in the group to a single idea or line, or even an effort to develop an organization. Most of the people in the network agreed with the 60s idea that women ought to be organized as women and minority men and women should be organized as minorities to the extent they wanted to be. And for that matter, white men should get together and talk as white men. Wouldn’t that seem like a relevant grouping?

As the network grew and got more and more socially complex, it fell apart into subnetworks. I regret that we couldn’t keep it together as it expanded, but I must admit that I enjoyed participating in just about every kind of conflict that you can get in a multicultural, multigenerational coalition. We lost the sense of a dynamic, ever expanding group that was unified both by its theoretical themes and by activist legal education practice, but for many of us that was more than compensated by the chance to participate in a whole new set of more specific kinds of race or gender or class oriented little groups. Of course, not everyone has such a sanguine view, and maybe I see it all through rose colored glasses.

It’s sort of ironic that as the sense of a coherent large group has dissipated, the purely imaginary entity called critical legal studies has come to have a larger and larger space on the map of American legal thought, as measured by things like Lexis. There have been an amazing number of articles written in the last 7 or 8 years about the relationship between feminist theory or black radical theory of one kind or another and critical legal studies.

So CLS didn’t die. It just faded away. CLS disintegrated into its own 60s-style self-referential paradox. The white male founders’ attempt to form a thesis was met with a balkanized antithesis of tribal interest identity politics. One of those tribes was Critical Race Theory.

This is the tenth in a series on Critical Race Theory (CRT).